The fundamental definition is that of the Brundtland report. Although it has been claimed that it is vague and ambiguous, it has never been seriously challenged:

“Sustainable development is development that meets the needs of the present without compromising the ability of future generations to meet their own needs.”

Lately, the “three pillars of sustainability” (human well-being, natural life-support and economic growth, often summarized by the catchy phase “people, planet, profit”) coined by the World Business Council for Sustainable Development (WBCSD) has become a widespread “operational” definition of sustainability. However, while the Brundtland definition clearly talks of needs (people) and the ability to fulfil these also in the future (planet) and that this is not in conflict with economic growth (profit), the three pillars are certainly not of equal standing. The needs of people are clearly at the core of the Brundtland definition, and in this respect economic growth can only be seen as a means to this end. Thus, the metaphor of “pillars” is clearly misleading for this means-end relationship. Whether natural life-support or biodiversity has a value in itself has been the topic of many discussions among philosophers and economists. Here it suffices to say that it clearly has a value for humans (while the opposite is not so obvious), both in functional terms and in terms of existence value (that we are willing to pay for nature just being there, also beyond what it brings us in terms of life-support functions). Thus, it is less important whether nature has a value in itself, since we are anyway as humans willing to value and protect it, and thus regard it as part of our understanding of human well-being. The triangle of means and ends can therefore be drawn like this: 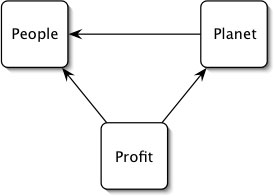 making it clear that the ultimate measure of sustainability must be found in terms of human well-being (understanding that nature’s existence value can also be expressed in these terms), and thus exclusively measured in these terms. This brings us to:

How do we measure sustainability?

As expression of human well-being, terms like QALY (Quality Adjusted Life Years) has been coined. Another term, focussing only on freedom from disease and premature death, is the DALY, which has recently gained much recognition in the area of health politics (The WHO Global Burden of Disease-study). These measures are a good starting point for further work. This does not mean that we are not critical towards the way these measures are defined and applied (with or without age-weighting, discounting, etc.), but as a concept it fundamentally seeks to capture central aspects of human well-being.

The QALY concepts operate with a fixed maximum of QALYs, since one person’s maximum well-being (or freedom from disease in the less encompassing versions, like the DALY) is counted as 1, and the expected maximum length of life is also fixed. Compared to the theoretical maximum value, the current total decrease in DALYs has been assessed to 26% (as a combination of years lived with a disability and years of premature death) out of which one third is attributed to environmental causes.

For a more encompassing QALY concept a similar maximum value can be defined, and the current total decrease can be tentatively assessed, as shown in our presentation on The integration of economic and social aspects in life cycle impact assessmen. Clearly, these measurements and the attempts at causal understanding are at an early stage, and will need to be refined in the time to come.