On February 1th, our client CONCITO – Denmark’s Green Think Tank published the results of the project ‘LCA of 500 food items’ and created quite a wake in the press and on social media.

The database, which was published under the somewhat pretentious name “The Big Climate Database”, presents climate footprints of 500 selected foodstuffs in an accessible and transparent tool intended as a basis for climate footprint calculation of meals and purchases, as well as for information and teaching.

The database was received with excitement by the Danish public. The day after the publication, the Danish Television published a quiz where consumers could test their knowledge and showed how to prepare mussels, one of the products with lowest climate footprint in the database.

However, several producers’ associations were critical and even allegations of ‘deception’ were put forward. Much to our satisfaction, Michael Minter from CONCITO calmly replied to these criticisms in a blog post and in such an eloquent way that I want to share some of his replies (in my own translation):

Scientists from two Danish universities that have been advising the Danish authorities based on the normative (attributional) LCA approach lament that it is not possible to compare their data with those of the new consequential climate database and fear that consumers and politicians might be confused. 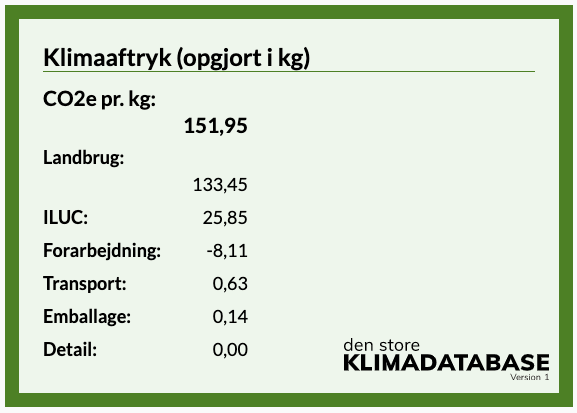 Especially the high climate footprint of tenderloin (compared to other meat cuts) in the database has been the subject of much debate, since previous reports have only shown the climate footprint for average beef – and this is the highest number the Danish public has yet seen on a beef product.

CONCITO points out that the purpose of the climate database is to compare different food choices, potentially leading to changes in the consumption towards products with a lower climate impact. Therefore, far from being a mistake, the consequential approach is a deliberate choice of method.

In the blog post, CONCITO explains how it is possible with a difference between what consumers influence by changing the demand for a product, and the emissions from the products that you physically use – something can indeed be hard to comprehend. In my translation below:

‘The consequential approach takes into account that a change in demand for a product is not necessarily met by just any manufacturer on the market. For example, the dairy system is very inelastic when it comes to responding to changes in demand for beef. In other words, you do not increase milk production, and the subsequent output of cows and calves for slaughter, when the consumption of beef increases.

The normative approach used by Aarhus University includes all animals that are on the Danish market for beef, and here dairy cows and their offspring are included as a normative fixed percentage of the milk system.

With the consequential approach in the climate database, the climate footprint from beef will be significantly higher than in the normative LCA. This is partly due to the fact that pure beef cattle herds have a major climate impact. Another significant factor is that the consequential approach also includes the climate impact from indirect land use and deforestation to either grazing or fodder production, which is often omitted in the normative approach’.

The use of the price of the different meat cuts to calculate their relative climate footprints has been another point of critique from meat producers and some consumers. But here is the clue:

CONCITO goes on to give this illustrative example of how the database can be used:

The debate on wild fish and farmed fish illustrates another core aspect of the consequential approach, namely what happens when a market is constrained.

The producer’s association for the Danish fisheries considers the climate database ‘flawed’ because it calculates the climate impact from farmed fish and not from the wild fish they actually catch, which may have a lower impact.

But CONCITO again reminds us that the purpose of the climate database is to provide information on the climate consequences of a change in demand. For fish, an increase in demand will ultimately affect fish farming, no matter if your fish is caught in the sea or comes from aquaculture. Here is the reasoning from CONCITO:

‘The results for fish are based on internationally recognized studies that show that the amount of wild-caught fish does not change. There are lots of fish in the oceans, but the market is controlled by quotas and we cannot just catch more than we do today.

Wild-caught seafood is generally a globally limited resource that cannot be increased, since the carrying capacity of the ecosystems is fully utilised in virtually all parts of the world. However, this does not apply to marine molluscs such as mussels, oysters and squid, which are found in abundant quantities.

Good fisheries management can help to increase fish stocks. However, considering that aquaculture today accounts for almost half of the world’s fish production, it is difficult to see how changes in local fisheries management in the EU can make a significant difference in the global fish market.’

Several dairy and meat producers’ organisations have criticised the climate database, primarily from the point of view that it is misleading to state the climate footprint per kg of food instead of the content of nutrients. They argue that food is chosen for nutritional value, calories and nutrition – so a kilogram of cucumber and a kilogram of meat is not comparable.

CONCITO points out that the nutritional content of the food is shown in the description for each of the products in the database. However, the climate footprint per kg of food is simply the most relevant and practical measure for food choices as part of complex dishes:

‘In addition to taste and enjoyment, we eat to get full and get the necessary nutrients – not to get as many calories, proteins, etc as possible. When we need to optimize the diet in relation to climate and health, the nutritional content is not the relevant measure. For example, no one buys according to calories or proteins, and most Danes today consume too many nutrients.

Besides that, recipes and shopping lists are normally described and accounted for by the weight of the different ingredients and products – not the amount of calories, protein, etc. The typical consumer goes out to buy 1 kg of potatoes – not 20 grams of potato protein.

The climate database has as its sole purpose to put focus on the climate impact of what you put in your shopping basket or meal, not to compose a nutritionally optimal purchase or meal. For that, it is preferable to orient oneself in the Danish official dietary advice.’

With the combination of the climate database for the 500 foods and this brand new official dietary advice – where good things are said about living both climate friendly and healthy on a whole-grain and mainly plant based diet – the Danes have free access to the – also in international context – most comprehensive, detailed, consistent and transparent information on how to make climate friendly food choices.

That said – we still miss to see political action in Denmark. Because, honestly, climate problems cannot be solved by consumer choices alone.